Lake Toba cultural sites would take you to Batak ancient times. You will be amazed by how spectacular their life was. For example, it was not clear when Batak ancestors first settled on Lake Toba. But various ancient relics show that the tribe does have a long history of settlement.

Here is our selection of 5 most attractive Lake Toba cultural sites. The Stone Chairs of King Siallagan (locally known as Batu Parsidangan, meaning “Trial Stones”) are a historical object in the form of stone chairs and tables. According to history, key meetings of the kingdom including trials of perpetrators took place here. Not far from the first object is the corresponding execution table. The perpetrators’ fate got decided on the meeting chairs and, if convicted, beheaded on the table. The stones are believed to be over 200 years old. See more. 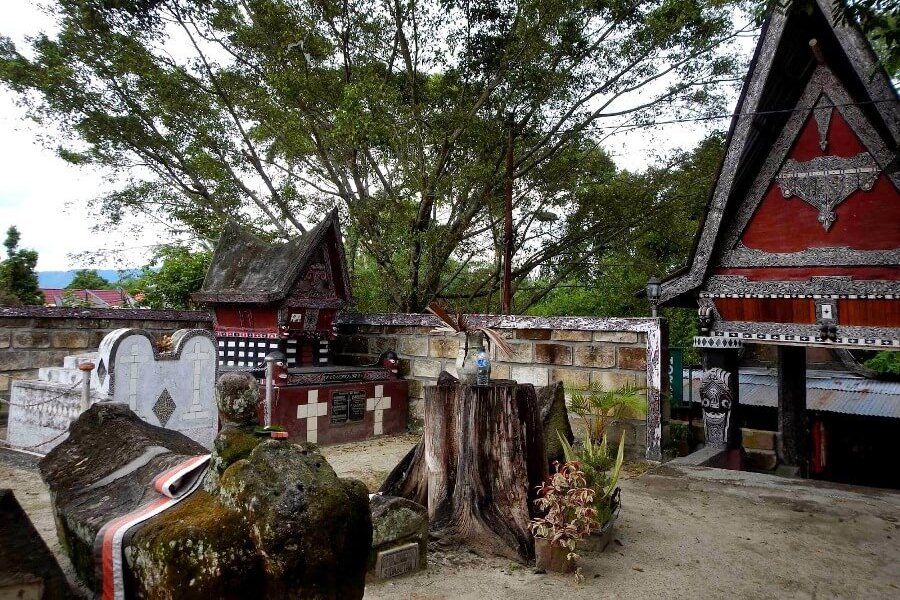 The tomb of the Batak king who adopted Christianity lies in Tomok village, 5 kilometers (3 mi) southeast of Tuktuk. The king’s image appears on his tombstone, along with those of his bodyguard and Anteng Melila Senega, the woman the king is said to have loved for many years without fulfillment. The tomb also depicted carvings of singa (mythical creatures with grotesque three-horned heads and bulging eyes). See more. Hopong Village is an old village located at Dolok Sanggul, North Tapanuli, 3 hours from Balige. It has a relic of historical sites in the form of buildings and statues typical of Hinduism. Ancient objects such as caves and statues are thought to be hundreds of years old. Some objects are the heritage of high artistic value. See more. Sisingamangaraja Palace is a former residence of King Sisingamangaraja XII, the last king of Batak Kingdom. The kingdom fell to the Netherlands in 1907, but the palace remains preserved. The residential area is estimated to be 1 hectare (2.5 ac). Located in the town of Bakkara on the southern shores of Lake Toba, it keeps valuable relics and antics of the king. The palace is also the site for tombs of the late king’s predecessors. See more. The mountain is considered a sacred place since it is believed to be the location of origin of Batak. According to legend, Bataks are descendants of human gods namely Siraja Odap-odap and Siboru Panujar. They descended the first pair of Batak on Pusuk Buhit. The pair (Siraja Batak and his wife) built the first settlement on the foot of Pusuk Buhit, i.e., between Sagala valley and Lintong Maulana valley. The place was known as Sigulanti. Siraja Batak later opened a new village called Sianjur Mula-Mula. From there, Batak has spread out to what it is today. See more.